The southernmost portion of Ontario has a humid continental climate that features snow and hot summers, with a Koppen-Geiger climate zone classification of "Dfa". Other locations with "Dfa" climate include northern portions of Illinois, Indiana, Iowa and Ohio in the United States. 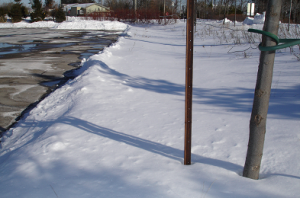 Snow being stored on a filter strip in Markham, ON

Sodium and chloride ions in de-icing salts applied to asphalt areas travel easily with the runoff water. De-icing salt can increase the mobility of some heavy metals in soil (e.g. lead, copper or cadmium). This may increase the downstream concentration of these metals [1][2]

To minimize risk of groundwater or soil contamination, the following management approaches are recommended [5], [6]:[edit]

Stormwater infiltration practices should not receive runoff from the following areas:

Underdrain perforated pipes should be located below the frost line to reduce the threat of ice clogging. Ontario provincial standard drawings of frost penetration depth are available from the Ministry of Transportation as OPSD 3090.100 for northern Ontario [7] and OPSD 3090.101 for southern Ontario [8].

Weirs are generally less prone to clogging from ice than orifices or valves under all flow conditions. Proprietary low flow devices are also available which are designed to mitigate clogging from ice or other solid debris.

Rubber plow blades are increasingly available and required in many jurisdictions. Their use reduces damage to all kinds of pavement surfaces and they are particularly recommended for application where LID facilities exist, such as permeable pavements and curb cut inlets of bioretention, bioswales, swales and stormwater tree trenches.

Freezing temperatures can cause problems with exposed collection pipes and portions of cisterns and pipes located above the foundation frost penetration depth. For standard drawings see Ontario Ministry of Transportation OPSD 3090.100 for northern Ontario, and OPSD 3090.101 for southern Ontario. Rainwater harvesting systems designed for year-round operation in cold climates like those in Ontario are typically limited to underground cisterns and outlet pipes located below the frost penetration depth, or cisterns integrated within buildings.

The survival of green roof plantings is greater in winters with long deep sub-zero temperatures. Being shallow and very exposed to warming sunlight, green roofs thaw rapidly. Frequent freeze-thaw cycles in the early and late winter are associated higher loss of vegetation on green roofs.

a gently sloping, densely vegetated areas that treat runoff as sheet flow from adjacent impervious areas. They function by slowing runoff velocity and filtering out suspended sediment and associated pollutants, and by providing some infiltration into underlying soils.

A mixture of mineral aggregates bound with bituminous materials, used in the construction and maintenance of paved surfaces.

A shallow constructed channel, often grass-lined, which is used as an alternative to curb and channel, or as a pretreatment to other measures. Swales are generally characterized by a broad top width to depth ratio and gentle grades.

The practice of intercepting, conveying and storing rainwater for future use. Captured rainwater is typically used for outdoor non-potable water uses such as irrigation, or in the building to flush toilets.

The slow movement of water into or through a soil or drainage system.

Penetration of water through the ground surface.