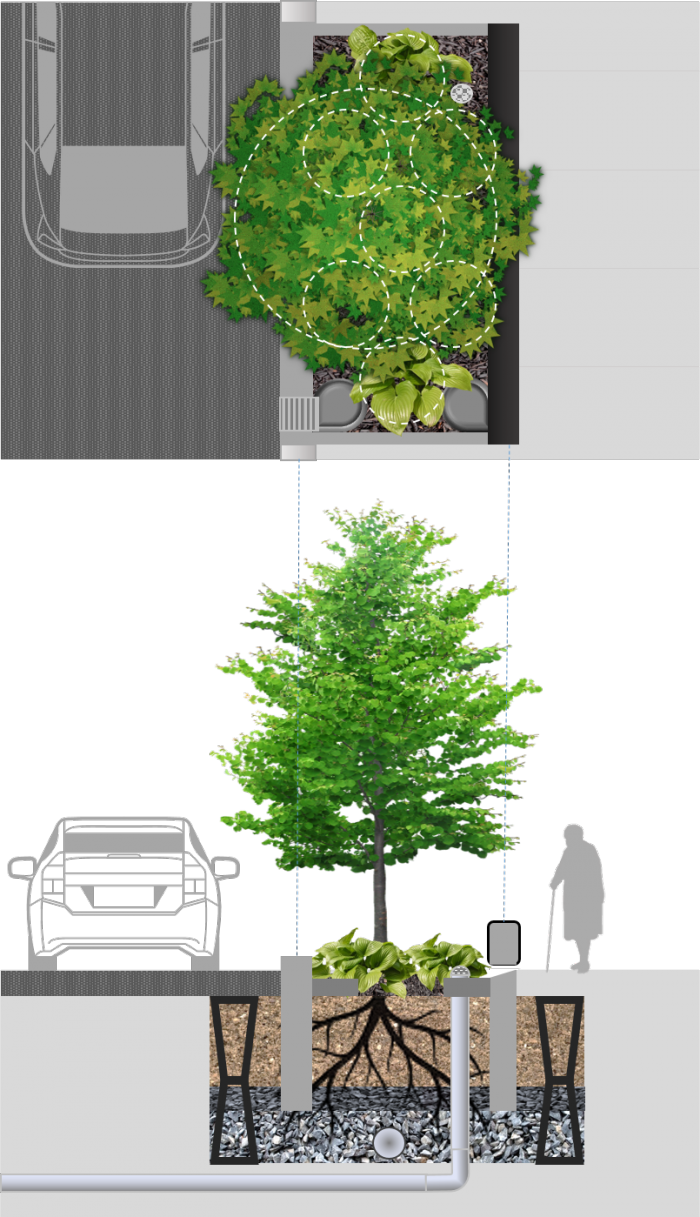 This is an image map of an extended tree pit, clicking on components will load the appropriate article.

Trees can be incorporated into bioretention cells with other plant types, or otherwise into their own planting pits.

The extent of interception is influenced by a number of factors including tree architecture and it has been estimated that a typical medium-sized canopy tree can intercept as much as 9000 litres of rainfall year. (Crockford and Richardson, 2000).

A study of rainfall interception by street and park trees in Santa Monica, California found that interception rates varied by tree species and size, with broadleaf evergreen trees provided the most rainfall interception (Xiao and McPherson, 2002). Rainfall interception was found to range from 15.3% for a small jacaranda (Jacaranda mimosifolia) to 66.5% for a mature brush box (Tristania conferta now known as Lophostemon confertus). Over the city as a whole the trees intercepted 1.6% of annual precipitation and the researchers calculated that the annual value of avoided stormwater treatment and flood control costs associated with this reduced runoff was US$110,890 (US$3.60 per tree).

A commonly held view is that a tree's root system will be similar to it's visible crown. For many trees, this is not the case, as roots will more often spread much more widely, but to a shallower depth [1].

Multiple methods for distribution and conveyance of runoff into the system are recommended for redundancy and conservative designs. Combinations may be made of: 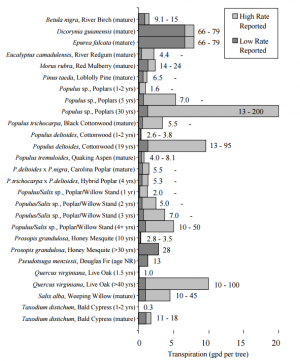 In our effort to make this guide as functional as possible, we have decided to include proprietary systems and links to manufacturers websites.
Inclusion of such links does not constitute endorsement by the Sustainable Technologies Evaluation Program.
Lists are ordered alphabetically; link updates are welcomed using the form below.

The interception, storage and eventual evaporation of rainfall from vegetation canopies.

Ground depression acting as a flow control and water treatment structure, that is normally dry.

An alternative practice to traditional impervious pavement, prevents the generation of runoff by allowing precipitation falling on the surface to infiltrate through the surface course into an underlying stone reservoir and, where suitable conditions exist, into the native soil.

A perforated pipe used to assist the draining of soils.

A vegetated practice that collects and treats stormwater through sedimentation and filtration. Contributions to water cycle/water balance are through evapotranspiration only; no infiltration.

Best management practice. State of the art methods or techniques used to manage the quantity and improve the quality of wet weather flow. BMPs include: source, conveyance and end-of-pipe controls.