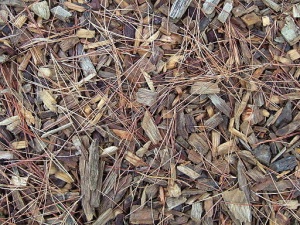 Pine mulch will help hold moisture in the soil

Mulch should be applied on the surface of bioretention practices at a minimum depth of 75 mm and added to cover bare areas in order to avoid erosion. Mulch should only be removed and replaced when contamination has become a concern, when clogging has occurred, or when surface storage volume has been reduced.

Avoid the use of stone as a cover for vegetated practices. While stone is a low maintenance surface treatment, it hinders the addition of plant matter and formation of topsoil and does not provide the same treatment benefits as mulch. Also, the stone can be problematic for maintenance if it migrates into the soil.

Shredded hardwood mulch is generally recommended for LID facilities. Its fibrous texture knits together somewhat; providing limited erosion control. In areas with particularly high flow (e.g. around inlets) inorganic mulch or coarse decorative aggregate is recommended instead, as these will not float. All organic mulches have the potential to float and migrate in surface flow after a previously dry period. [1]

(1) The wearing away of the land surface by moving water, wind, ice or other geological agents, including such processes as gravitation creep; (2) Detachment and movement of soil or rock fragments by water, wind, ice or gravity (i.e. Accelerated, geological, gully, natural, rill, sheet, splash, or impact, etc).

Soil, sand and minerals washed from land into water, usually after rain. They pile up in reservoirs, rivers and harbors, destroying fish-nesting areas and holes of water animals and cloud the water so that needed sunlight might not reach aquatic plans. Careless farming, mining and building activities will expose sediment materials, allowing them to be washed off the land after rainfalls.