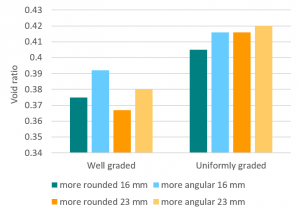 The highest void ratio is found in uniformly graded aggregate, as there are no smaller particles to occupy the inter-particle pores. 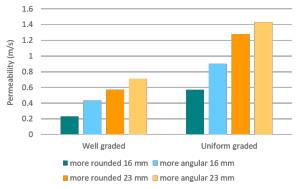 Higher permeability is found in larger, angular, uniformly graded aggregate. This is due to larger pore sizes and lower tortuosity.

The important characteristics of the stone within the reservoir or underdrain are the lack of fines, the void ratio and (to a lesser extent) the permeability. Porosity and permeability are directly influenced by the size, gradation and angularity of the particles [1]

Aggregates used to line swales or otherwise dissipate energy (e.g. in forebays) should have high angularity to increase the permissible shear stress applied by the flow of water. [2] However, in some surface landscaped applications there may be a desire to use a rounded aggregate such as 'river rock' for aesthetic reasons.

Soil particles with a diameter less than 0.050 mm.